Hi there – it’s Alena. This post is about some caving I did to get prepared for fieldwork in India. Why caving? Well, caves host speleothems, which are some of the best archives for reconstructing past climate change. That’s particularly true for more tropical regions such as India, where you may have a hard time locating other traditionally-used archives such as seasonally formed trees rings, well-preserved pollen, or ice cores from glaciers. Speleothems in caves form when water full of dissolved calcite drips from the top of a cave. Just like limescale starts to build up at the bottom of your tea kettle, calcium carbonate (CaCO3) begins to accumulate where water continuously drips in the same spots in a cave. This accumulated CaCO3 preserves the isotopic signatures of oxygen from the water that once rained out above the cave, and the isotope reconstruction from an entire speleothem can point to times when precipitation patterns changed in the past. Speleothems have many advantages for climate reconstruction, including the fact that their layers can be dated quite accurately using Uranium-Thorium dating. In fact, speleothems can preserve detailed climate records going back hundreds of thousands of years – you just have to be lucky to get the right one! 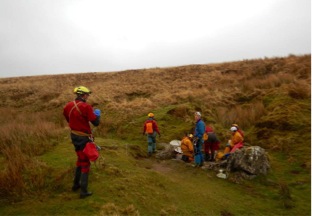 Last weekend I had the good fortune to join the 4C’s (Cambridge Climbing and Caving Club) (http://thecccc.org.uk/) for their first caving trip of the year. The first picture was taken after about 30 minutes of struggling to get on all my layers of kindly loaned caving gear (long underwear, flannel onesie, caving oversuit, SRT harnesses, neoprene socks, kneepads, a pair of wellies, and my helmet). I was told that I could either let the oversuit cover my wellies, or tuck them inside the wellies… depending on the choice I made, my boots would fill up less quickly with water, or allow me to take off my boots more quickly to pour out the water. Clearly, I think there is nothing more fun than getting muddy from head to toe in the name of research.

We had travelled to Yorkshire, where we visited the Easegill cave system, which is arguably the UK’s most famous cave system, as it extends for over 60 kilometers underground and connects three counties. We entered by “Lancaster Hole”, which is a 34 m deep shaft that starts at about the width of one person, and gradually widens out as you descend (hanging on a rope in mid-air).

Once we reached the bottom, I was pleased to find many small streams and dripping stalactites to collect some sample water from (because, even if it wasn’t India yet, I couldn’t really resist sampling something). And needless to say, it didn’t take long to get very muddy.

One of the most impressive sections of the cave was the “Collonades”, with pillars that reached straight from the ceiling of the cave to its floor. We also squeezed through a long narrow tunnel to reach the “Graveyard”, which houses a huge range of stalactites and stalagmites.

For the TwoRains project, my ultimate goal is to find some speleothems in India like ones you see in the photos from the Easegill cave system above. In a cave close to many of the Indus Civilization’s major sites, a speleothem might hold the key to unlocking some of the climate mysteries in this exciting part of the world.